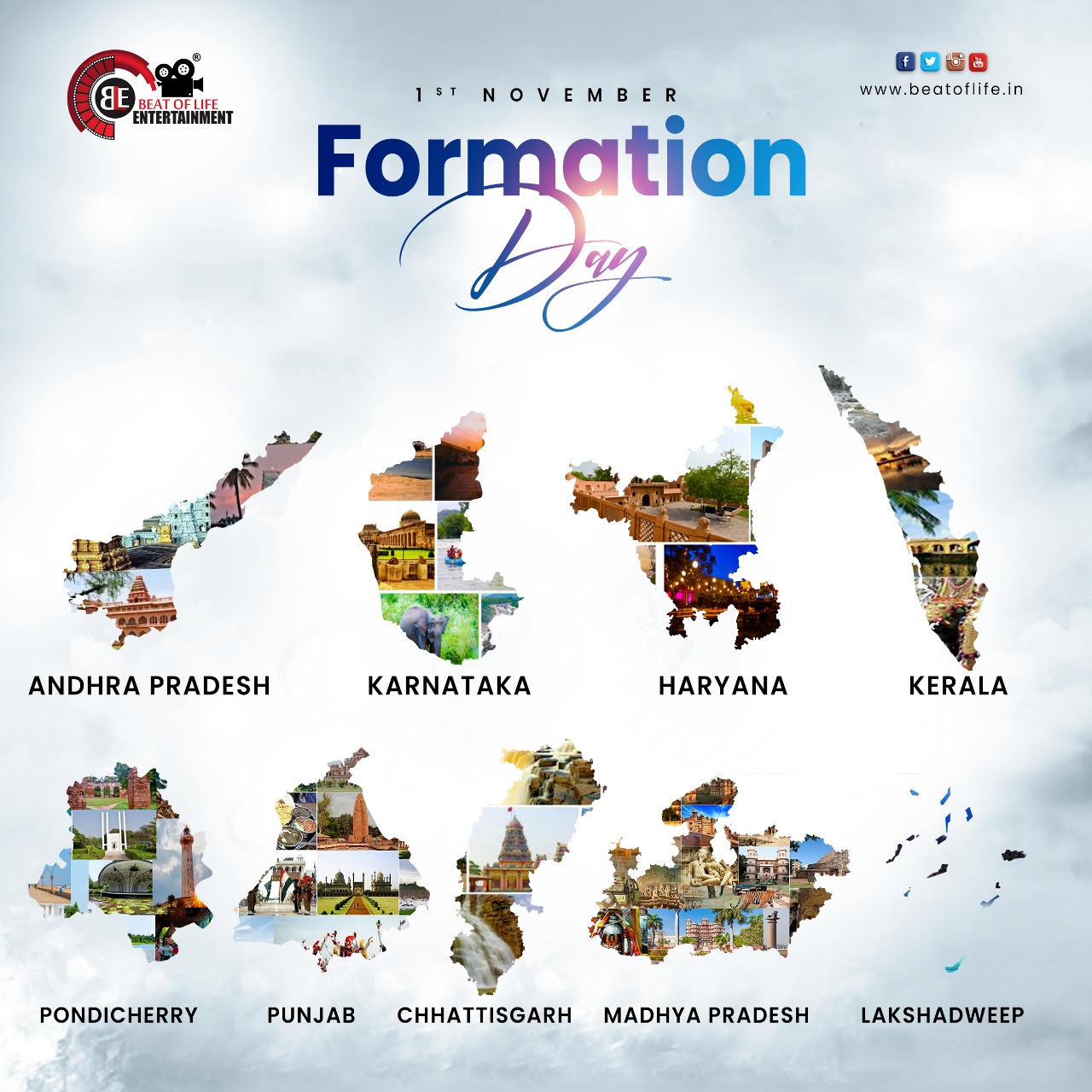 India has 28 states and 8 Union Territories, and these states and Union Territories did not form in a single day. The establishment of numerous states was a lengthy process. Every state in India has a distinctive culture and population. These aspects were taken into account, and distinct states developed over different periods of time. Madhya Pradesh, Karnataka, Chhattisgarh, Haryana, Punjab, Kerala, Andhra Pradesh and 2 Union Territories, Pondicherry and Lakshadweep celebrate formation day on 1st November.

The following are the chronicles of the establishment of these Indian states:

The state was established after it was cut off from the former Madras Presidency as a result of several protests and sacrifices. Later on, the Telangana region, which at that time was a part of Hyderabad state, merged with Andhra state and formed a complete state of Andhra Pradesh.

After the 1956 adoption of the Linguistic Reorganisation of States and the merger of the Malabar, Cochin, and Travancore provinces, these three states, along with Andhra Pradesh and Karnataka, became independent
the Madras Presidency on November 1, 1956.

Ten Chhattisgarhi and six Gondi-speaking southern districts of Madhya Pradesh were divided to form the state. after the Madhya Pradesh Reorganisation Act 2000 was approved by the then-President on August 25, 2000

According to the States Reorganization Act, the southern Marathi-speaking region Vidarbha was given to Bombay along with the states of Madhya Pradesh, Vindhya Pradesh, and Bhopal.

The state of Karnataka was created by the union of the Kannada-speaking areas of South India. The Kannada-speaking regions of the Bombay and Madras presidencies, as well as the principality of Hyderabad, were combined with the princely state of Mysore to form a single sub-national entity that spoke the Kannada language.

According to the Punjab Reorganisation Act (1966), the Shah Commission, presided over by Justice JC Shah, divided the existing state of Punjab and established the borders of the new state of Haryana.

This was combined with the state of East Punjab in 1956 to form a new, larger Indian state known simply as “Punjab.” However, following the linguistic separation of Haryana state, the Punjabi-speaking people created the state in accordance with the Punjab Reorganisation Act (1966).

Lakshadweep, the smallest Union Territory in India, is an archipelago with 36 islands covering an area of 32 sq km. It is a single-district Union Territory made up of ten inhabited islands, three reefs, and 12 atolls. It was formed on 1 November 1956.

These are the seven states and 2 Union Territories which were established at various points in time on the same day. Even though they all represent various cultures, they all together represent India.