A Tribute to the great scientist, biologist, physicist, botanist and an early writer of science fiction Jagadish Chandra Bose Ji on his Birth Anniversary. 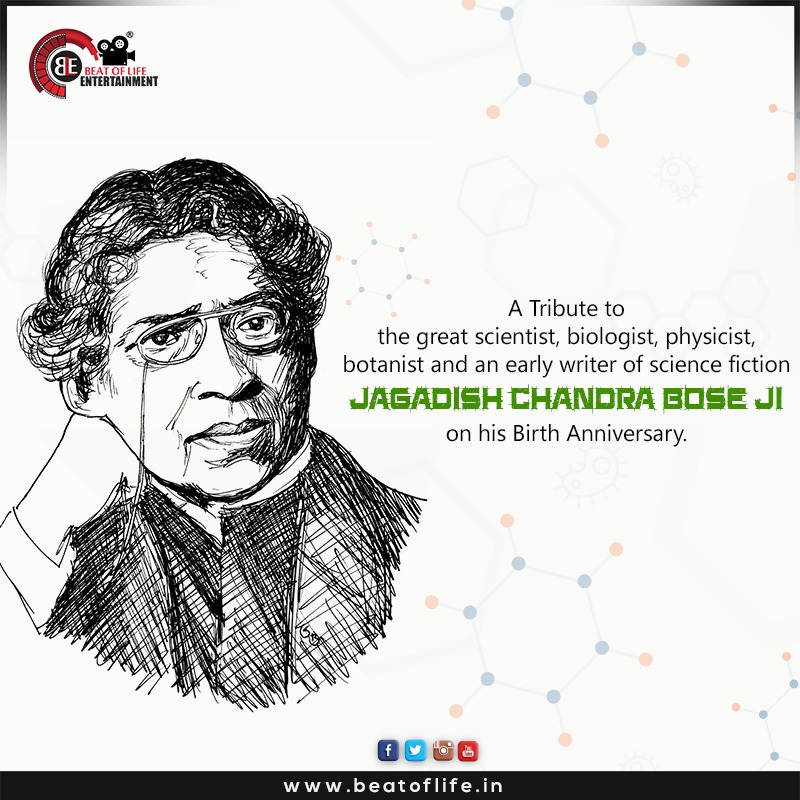 Jagadish Chandra Bose was a great Indian scientist as well as a famous physicist, biologist, polytheist, botanist and archaeologist, who proved that plants also has feelings.

Jagadish Chandra Bose was born on 30 November 1858 at Mymensingh in Faridpur, Dhaka district in Rarauli village of Mymensingh (present day Bangladesh). His father’s name was Bhagwan Chandra Bose. Initially, he got his primary education from a school in the village itself. After that he came to Calcutta and got himself enrolled in ‘St. Xavier’s School’. Jagadish Chandra Bose was very interested in biology, yet a famous professor of physics. Father Lafont inspired Bose to study ‘Physics’. After receiving his degree, 22-year-old Bose went to London for medical science education. But due to poor health, he gave up the idea of becoming a doctor and did B.A from ‘Christ’s College’, Cambridge. and took his degree.

After this Jagadish Chandra Bose returned to India in 1885, after which he was appointed as Professor of Physics at the Presidency College, Kolkata. But half salary was fixed for this post for him. However, Bose opposed this discrimination and worked without pay for 3 years, due to which his financial condition deteriorated but in the fourth year Jagadish Chandra Bose won and he was given full salary. He made many discoveries with the discovery of radio, research on plants, study of metal fatigue and reaction of cells etc.

Jagadish Chandra Bose was awarded the title of ” Knight ” in 1917. Soon he was elected Fellow of the ‘Royal Society London’ for Physics and Biology. Bose did not do his entire research work with any good (expensive) equipment and laboratory, so Jagadish Chandra Bose was thinking of making a good laboratory. The ‘Bose Institute’ (Bose Bigyan Mandir) is inspired by this idea, which is a famous centre of the nation for research work in science. Jagadish Chandra Bose, the great scientist who made his important contribution in the field of science, breathed his last in Giridih on 23 November 1937 at the age of 78.