Truth cannot be hidden for fear that somebody would exploit it. – Atal Bihari Vajpayee 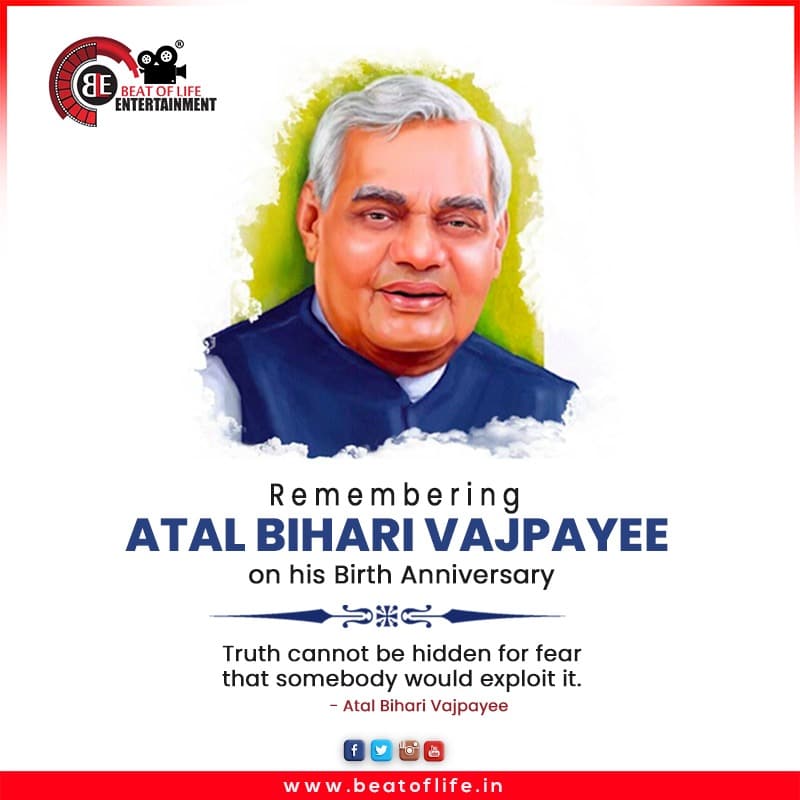 Atal Bihari Vajpayee, famous among the masses, was known for his political commitment. He was born in a middle class family on 25 December 1924 in Gwalior, Madhya Pradesh district. His father Krishna Bihari Vajpayee was a teacher and also a poet. His mother’s name was Krishna Devi Vajpayee. He was the first Prime Minister after Pandit Jawaharlal Nehru who became Prime Minister for two consecutive terms.
He remained active in Indian politics throughout his life. For a long time, he also edited many national newspapers and magazines such as Rashtradharma, Panchjanya and Veer Arjuna. He began his life as Pracharak of Rashtriya Swayamsevak Sangh, with the determination to remain unmarried for the rest of his life, and fulfilled that determination with complete dedication until he reached the highest position in the country.

He began his political work from Arya Kumar Sabha of Gwalior, he was considered the youth force of Arya Samaj at that time and in 1944 he also became its general secretary. He joined the Rashtriya Swayamsevak Sangh (RSS) in 1939 as a volunteer and then influenced by Babasaheb Apte, he took training in the RSS training camp during 1940-44 and became a full time worker of RSS in 1947. Due to the spread of the seeds of partition, he left his law studies midway.

Atal Bihari Vajpayee was the 10th Prime Minister of India. He first served as the Prime Minister of India for 13 days in 1996 and then from 1998 to 2004. He was the leader of Bharatiya Janata Party (BJP).
Vajpayee’s political journey began as a freedom fighter. He was arrested along with other leaders for participating in the ‘Quit India Movement’ in 1942.

In 1954, he was elected as a Member of Parliament from Balrampur seat. Despite his young age, Vajpayee’s wide-ranging vision and knowledge helped him gain respect and place in the political world. In 1977, Vajpayee was elected as the foreign Minister.

Hence, he has contributed a lot for our country and he died on 16th August, 2018.