Rajendra Prasad was the 1st President of India (26th January 1950 – 13th May 1962). He was an Indian Independence activist and lawyer by training. Rajendra Prasad was born on 3rd December 1884, Ziradei, Siwan District, Bihar, India. His Father’s name was Mahadev Sahai Srivastava & Mother’s name was Kamleshwari Devi. His father was a Sanskrit and Persian language scholar & his mother was was a religious woman who used to tell her son stories from the Ramayana and Mahabharata. In 1902, Rajendra Prasad enrolled at Presidency College in Calcutta as a science undergraduate. In March 1904, he passed the F. A. at the University of Calcutta, and in March 1905, he graduated with a first division. He was one of the prominent leaders of the Indian independence movement and played a major role as the President of the Indian National Congress. 26th January 1950, Dr. Prasad was honoured with this post. Dr. Rajendra Prasad was entrusted with the work of Food and Agriculture Department as a cabinet minister in the government of Pandit Jawaharlal Nehru. He was appointed as the President for constitution making in the Constituent Assembly of India. Rajendra Prasad was appointed to the High Court of Bihar and Odisha in 1916. In 1917, he was elected as one of the first members of the Patna University Senate and Syndicate. Rajendra Prasad Gandhi was one of the main disciples, he was determined to lay down his life for the freedom of India. Dr.Rajendra Prasad had a major role in the Independence Movement. Rajendra Prasad’s first association with Indian National Congress was during 1906 annual session organised in Calcutta, where he participated as a volunteer, while studying in Calcutta. Rajendra Prasad wrote many books, Satyagraha at Champaran (1922), Division of India (1946), Mahatma Gandhi and Bihar, Some Reminiscences (1949), Bapu Ke Kadmon Mein (1954), Bharatiya Shiksha, At the feet of Mahatma Gandhi. He spend the last months of his life at Sadaqat Ashram near Patna and he died on February 28, 1963, at the age of 78 in Patna. 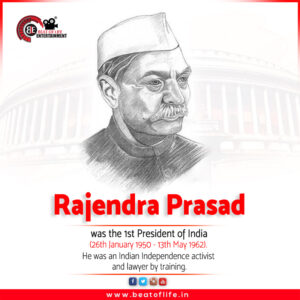