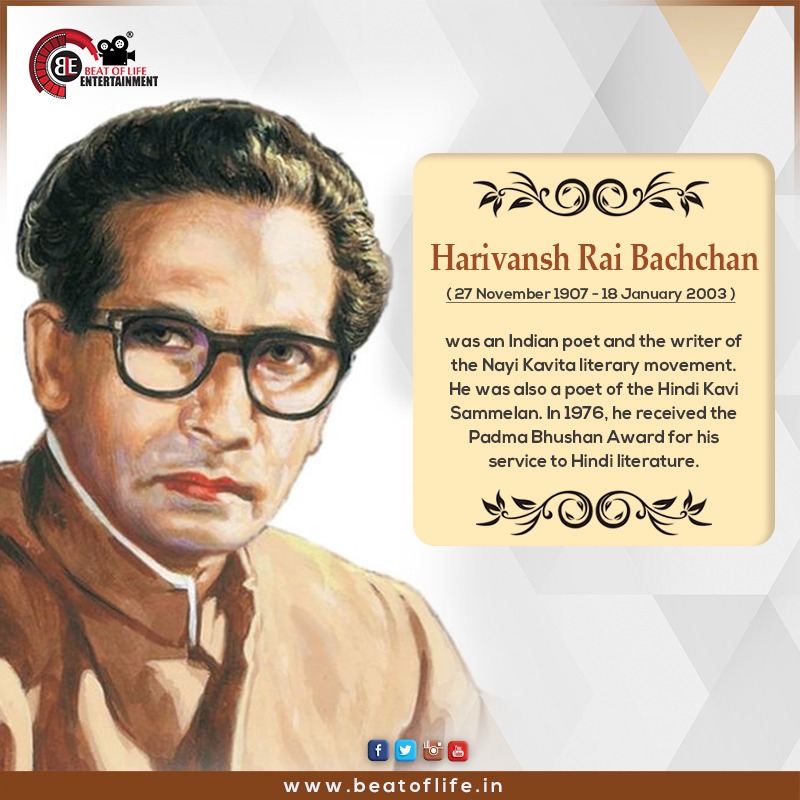 Harivansh Rai Bachchan was a poet of Hindi language, it is believed that his poems had changed Indian literature, his style was different from earlier poets. That is why he is called the author of the new century. His works infused a new stream in the poetry of India. Bachchan sahib was born on 27 November 1907 in a working family of village Babupatti, District Pratapgarh, Uttar Pradesh. His father’s name was Pratap Narayan Srivastava and his Mother’s name was Saraswati Devi. He received education first in Urdu and then in Hindi in Kayastha Pathshala. He completed his MA in English from Allahabad University and Ph.D. from Cambridge University by researching the poems of noted poet WB Yeats. During this, he also joined Mahatma Gandhi for the independence of the country. In 1952, he went to Cambridge University in England to do his PhD in English Literature. After this he started putting Bachchan in place of Srivastava in front of his name. He was the second Indian to receive a doctorate in English Literature from Cambridge University. After coming back, he again started studying in the university as well as working in All India Radio Allahabad. When he was in the first year of his graduation during that point of time he met Shyama Bachchan. After which the two fell in love. In 1926, both of them got married with everyone’s consent. Shortly after marriage, his wife Shyama Bachchan died suddenly. Then after some time he married Miss Teji Suri. In 1955, Harivansh Rai ji moved to Delhi and the Government of India appointed him as a Hindi specialist in the Ministry of External Affairs. In 1966, his name was taken to the Rajya Sabha. After 3 years, he was given the Sahitya Akademi Award by the Government of India. In 1976, he was awarded by the Padma Bhushan for his contribution to Hindi literature. The main works of Harivansh Rai Ji are Nisha Nimantran (1938), Madhukalash (2005), Madhushala (1935), Satrangini (1967), Do Chattanein, Milan Yamini, Janamdin ki Bhent, Neeli Chiriya. Harivansh Rai died on 18 January 2003 at the age of 95 in Bombay. But he is still alive through his works. His works created history and gave a new direction to Indian poetry, for which everyone is grateful to him and proud that such a great man was born on the land of India.