Dr. Vikram Sarabhai was born in Ahmedabad, Gujarat on 12th August 1919. Dr. Vikram A Sarabhai earned Tripos and Ph.D. in Cosmic Ray Physics from Cambridge University in UK. At the Indian Institute of Science in Bangalore, he collaborated with Nobel Laureate Sir C.V.Raman. Dr. Sarabhai established the Physical Research Laboratory (PRL) in Ahmedabad upon his return from Cambridge. In addition, he founded the Ahmedabad Textile Industry Research Association (ATIRA) and the Indian Institute of Management (IIM) in Ahmedabad.

Dr. Vikram A. Sarabhai founded the Indian Space Programme in 1960, believing that space technology could play a significant role in national development and solving common man’s problems. He saw enormous potential in using modern science to support in the development process. He developed strategies for bringing education to the most remote villages through satellite television. The Indian Space Programme focused on achieving self-sufficiency and developing the capability to build and launch communication satellites for television broadcast, telecommunications, and meteorological applications, as well as remote sensing satellites for natural resource management. Thus, the Indian Space Programme initiated space activities in the country, and the Indian Space Research Organization (ISRO) was established on August 15, 1969.

Dr. Vikram Sarabhai later established the Community Science Centre under the aegis of the Nehru Foundation for Development, which was later renamed as Vikram A. Sarabhai Community Science Centre. He was also appointed as Chairman of the Atomic Energy Commission He received the Shanti Swaroop Bhatnagar Memorial Award for Physics in 1962, he was awarded the Padma Vibhusan. He died on 30th December 1971 in Kovalam. 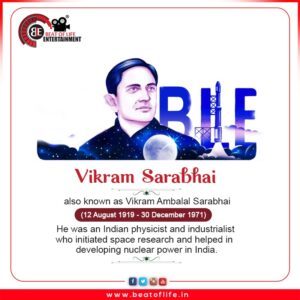